Quick update just because I'm excited!!! Bob is now in Advanced Training!!! Hoooorayyy for Bob! I'm so happy to have him "back" lol. He has matured a bit in our tiny absence but he's still the same old goof ball that I left him. I have a couple pictures I took this weekend and promise to have more up with him in a harness - maybe I can see if I can get some working pictures of him with the trainers! 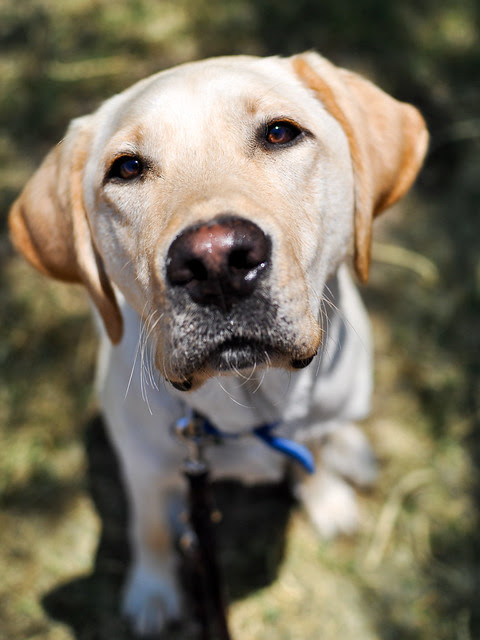 No longer a Puppy Raiser

Yes, it's true. Bob's last day with me was Friday. He is not going into formal training though. He is being placed with another raiser. Why you ask? Because Tuesday I started my new job - My work informed me that it might be too much to do puppy raising and my job so they advised me to place him elsewhere. What awful place could I be working at that thinks it would be too much for me to handle work and Bob do you say? Well.... I am the new Kennel Manager at Guide Dogs of Texas!!! Yay me!!

While yes, I am sad that Bob is no longer with me I will get to see him everyday once he comes into advanced training - which is currently set for January, so its more like a temporary absence other than me giving him up.

I am excited to be working more closely with GDTx, this job will hopefully transition into a GDMI apprenticeship some time down the road so that is my 'long term-ish' goal in taking it. My responsibilities will be taking care of the dogs that are in advanced training, basic grooming needs, getting ready to go out for training in the mornings and feedings at night, finding boarders for them on the weekends, lots of kennel maintenance and rehoming career changed and retired dogs. There are a lot more smaller details but those are the main aspects of the job. I spent all last week training and my first 'solo' day will be Monday when all the dogs in formal training come back from being boarded for the weekend.

There was a full 24 hours job interview for the job which was very interesting. The reason for the full 24 hours is because they were looking for a good candidate who would be able to transition into the apprenticeship once the position opens up so they kind of combined the 2 interviews in one. The day consisted of getting assigned a dog, learning some handling skills and going out for a blindfolded walk all before lunch time. We then went over how to do sighted guide and went out and had lunch with a client. We got back, had a short break and learned more about obedience sessions and were watched by the Director of Training. We had Dinner with a volunteer client host (someone who comes and cooks for the clients while in class) and the next morning had a meeting with the CEO. About an hour later I sat on the porch in conversation with the Training Director and another GDMI where she "cruelly" informed me that while I had amazing attributes and had done so much for the organization they would, however, be dropping me from the Puppy Raising Program. It took me a few seconds to laugh at that lol. Thinking about giving up Bob stung a little but I just had to tell myself I would see him again and get to watch him advance in his formal training.

Will post soon with Bob news - promise, but for right now I have a poll that I would like everyone to participate in. It's about dog treats - I'm not going to say much because I'm trying to keep it as unbiased as possible. Please post up a link to it so all your other dog peeps can give their opinions as well. I look forward to your responses, let me know if you have any questions. Thanks much!


What would you prefer to use as an aid to training your dog? A no-mess, paste based dog treat that you can squeeze out of a tube/dispenser - similar to tooth paste. Or traditional individual dog treats held in a pocket or treat pouch.

* If the box is not working please click the link to get to the poll. Dog Treat Poll
Posted by Natalie at 8:10 PM No comments:

Email ThisBlogThis!Share to TwitterShare to FacebookShare to Pinterest
Labels: Poll

Bob and the Bus

I had to go up to campus today to stop by an office so instead of driving Darrell and I took the shuttle bus that goes from out apartment to the school. This was Bob's first experience on a bus and I think he did pretty well. The first time we got on he had a tiny issue with wanting to meet/sniff everyone that was already sitting (we sit in the back where there is more room). but when we got back on to go home he did much better and only sniffed a foot that was out in the isle. His walk in between was pretty good, his pulling is much better but he has started walking a little wide so we gotta work on that. Well, thats about it, here is a picture of him sitting on the bus! 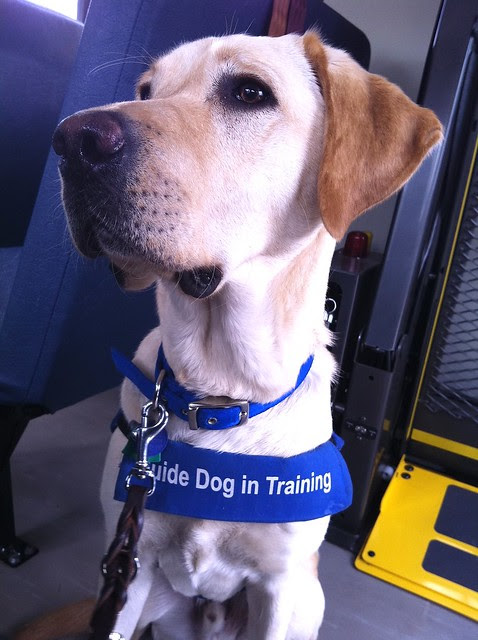 Bob, other dogs and new people

So my last post I mentioned that Bob had a training walk with Larry Gelvin, the Puppy Program Manager. That walk went really well, we had gone to a nice, older neighborhood in San Antonio. Bob got the opportunity to work more on crosswalks and street noise. Once, when we were stopped at a curb a big delivery truck passed right by him and he didn't even flinch. We also learned a new left turn technique to work on with Bob. His pulling has improved dramatically, just a few tiny reminders at the beginning of the walk and he's golden!

Larry had invited along two of GDTX's newest employees to go with us and observe and try out a training walk themselves. Hillary, who is Gelvin's new assistant and puppy program supervisor got a chance to walk with Bob after about 10 minutes of him walking with me. I'm sorry to say it but he tested her like crazy. He didn't pull too much, which made me happy, but he didn't really obey any other commands given - at least not the first time it was given. Next was Rene, the new Breeding and puppy acquisition specialist. His walk went a bit better but Bob was completely unfocused on working and just focused on the treats that he knew were in Rene's pocket. Bob started to focus a bit after he figured out he wasn't going to get all of those treats immediately but still wasn't on his game anymore - a lot of that had to do with him starting to check out as he got tired. We need to work on Bob's stamina.

The issues Hillary and Rene had with Bob have all happened to me multiple times but I gotta say, it was very interesting to see him just 'switch' like that. It really reinforced the importance of having a connection with a dog and making sure that he/she knows that you are the one in charge. I love learning more about doggy brains and that was a really good learning experience for me. I suppose it was for them too so it all works out for the best.


We also had a training day at GDTX on Saturday with all but two puppies in the program. There were a few older dogs there for the boarders to learn some new info so all together there were at least 13 dogs there. It took Bob a few minutes to get over the fact that he couldn't go play with all of his friends (there were 2 dogs there that he had spent time with while we were moving) but once he settled down he did very well. We went over some basic stuff - the A-litter puppies are on their way to turning 6 months so we worked on the correct way for people to greet the puppies, and the four important things all puppies must be able to do when they get into formal training. Head up, tail wagging, straight line walking and straight sits. There were a few other little lessons but they were mainly for the younger puppies, such as 'going busy' on command and potty training stuff. GDTX is getting really close to breeder evaluation of the new litter so I'm excited to see who they choose.

Sorry there are no pictures from the training days, I forgot my camera both times. So instead here is a picture of Bob from this weekend. Just so you can see his happy face! 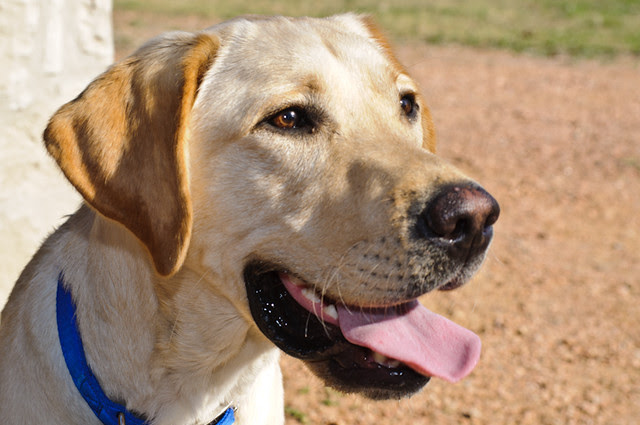 Here is Egypt because I know you love her too ;) 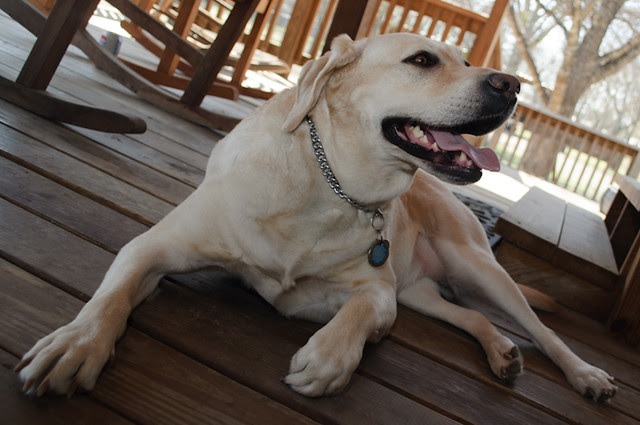 Bob is back - again

Bob is back! Yay!!! He's adapting to the new apartment nicely - he and Egypt are learning how to live together in a tinier apartment. He has also advanced to being left alone - not in his crate but free roaming and he's done amazingly!!! Well thats really all the news for now - he has a training walk with Larry on Friday soooo let you know how it goes! 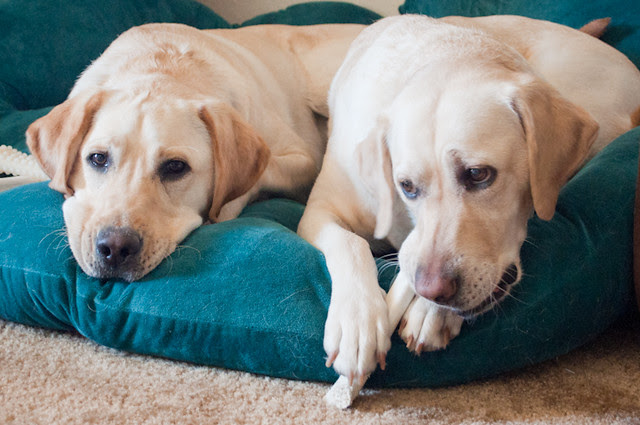 So, its been a bit quiet lately - sorry about that. Bob is actually gone right now because we just moved apartments. I wanted him out of the apartment while I packed and unpacked so he's gone until the 1st or 2nd. In the mean time you'll have to be happy with pictures of Bob at the dog park :)

We've been a few times in the past few weeks - I have only taken my camera once though. He was very timid the first time we went - he spent the entire hour sniffing every tree in the area and not playing with any other dog. The next few times we went though he didn't need to sniff everything, he already had, so he spend the whole time playing and running and chasing other dogs. So, here are some pictures of his first visit.

Natalie
San Antonio, Texas, United States
So, my name is Natalie and I am currently a senior at UTSA attempting to major in Kinesiology and minor in Biology. What I do after I graduate is still up in the air, only time will tell lol. I'm engaged and the wedding is being planned for January 2012. Thats about it for now - hope you enjoy :)

Pictures of Bob, Egypt and some random things uploaded to my Facebook page. (almost daily)